Ear infections (otitis media) are a common occurrence among young children, particularly among those who are three years old or younger. In fact, 10 million cases are diagnosed every year, accounting for over 35 percent of all pediatric visits in the United States.

A middle ear infection often causes a high fever, hearing difficulty, fluids draining from the ear, and ear pain in young children, among other discomforts. In the event that your child exhibits the previously mentioned symptoms, a visit to the doctor’s office is a must.

For the most part, antibiotics are the most common treatment method. However, studies show that this can become a problem, as mentioned in this article from the website of The American Chiropractic Association:

Standard treatment for most cases of otitis media is with antibiotics, which can be effective if the culprit is bacterial (antibiotics, of course, do nothing to fight off viruses). But, according to many research studies, antibiotics are often not much more effective than the body’s own immune system. And repeated doses of antibiotics can lead to drug-resistant bacteria that scoff at the drugs, while leaving the child screaming in pain.

When facing persistent and/or frequent ear infections, you should consider alternative treatment methods. Among the available alternatives, many experts recommend seeing a certified Fort Wayne chiropractor.

At first, it may seem unlikely that a chiropractor can help clear ear infections. However, the middle ear is comprised of three bones, making it well within the scope of chiropractic care. In fact, studies have shown that it is quite effective at treating ear infections, provided that there are no irregularities like an abnormally shaped Eustachian tube. Furthermore, chiropractic adjustments help improve the body’s ability to heal itself. As a result, children who undergo adjustments usually do not have to deal with recurring infections.

Contrary to what many people believe, chiropractic care can be used to treat young children. A licensed Fort Wayne chiropractor, such as Dr. Kraig C. Keys or Dr. Kim Keys Lenhart of Keys Chiropractic, has been trained how to adjust his or her methods to accommodate the still-developing bodies of children. The next time your child exhibits the telltale signs of an ear infection, put the antibiotics on hold and see if chiropractic care can resolve the situation.

Teri has been a Certified Massage Therapist since 2001. She graduated from Ivy Tech Community College with an Associate of Applied Science degree in therapeutic massage and has been a full-time therapist since then. A variety of techniques within a session with Teri may include relaxation massage, therapeutic massage, trigger point therapy, deep tissue and aspects of reflexology. Teri is also trained in Hot Stone Massage and prenatal massage.

Teri is a member of Associated Bodywork & Massage Professionals and is certified to provide massage from the state of Indiana. 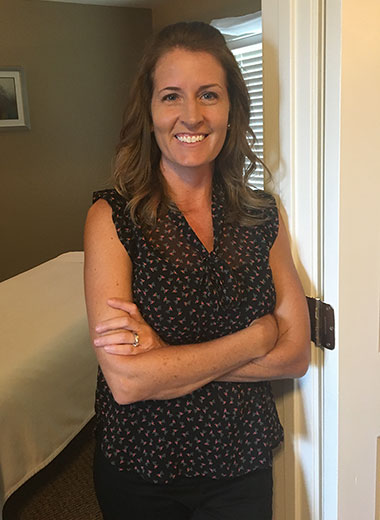